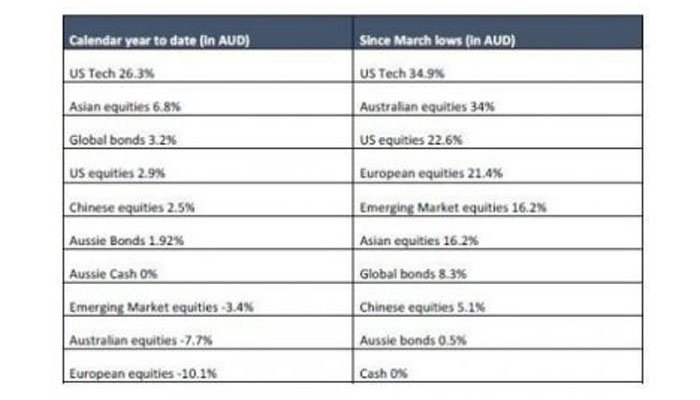 By Paul Garner - "Everyone deserves their ideal retirement and a future to invest in"August 28, 2020October 14th, 2020No Comments

Given how intricately linked investment market performance is to virus outcomes, the first part of this update will take you through where the world’s at from a virus perspective. The following may sound very different to what you are reading and hearing from politicians, health officials, and the mainstream media.

Politicians and health officials have clearly moved all-in when it comes to politicising everything about the virus.

Governments have handed full control over to unelected health officials, most with little to no private practice experience, who are now completely in control of our country and our economy. Most mainstream media are doing what they do best which is spreading fear with politically motivated undertones – the simple facts would be nice at this point. Our investment analyst, Chris Lioutas, goes to town on some of the facts you won’t see in the media…

• Almost 24 million confirmed cases worldwide – likely up to 10 times that amount, i.e. 240 million given lack of testing in some countries and given a significant number of those aged under 60 who contract the virus will have little to no symptoms (won’t get tested),

• Over 815,000 deaths – this number is likely both overstated and understated. Overstated in that dying with Covid and of Covid are two very different things. Understated in that many countries don’t/didn’t conduct autopsies and deaths went unreported,

• Of the current confirmed 6.6 million active cases, 99% of people have either no symptoms or mild symptoms, whilst 1% are serious or critical, • In most major cities where virus outcomes were pretty poor, virus contraction rates began to recede once approximately 20-25% of the local population had contracted or been exposed to the virus,

• Those without pre-existing conditions, under the age of 60, are highly unlikely to die. Preexisting conditions which are particularly problematic, as they similarly are for most viruses, include heart disease, diabetes, chronic respiratory disease, high blood pressure, cancer,

Whilst contraction rates are still high globally (to be expected given the virus is not just going to disappear), death rates have been declining. This is due to better hospital preparedness, better treatment plans (learnt from mistakes back in March/April – e.g. limit use of ventilators), and drug treatments (currently 4) that work even though no one seems interested in talking about these (hydroxychloroquine with azithromycin & zinc, remdesivir, ivermectin with doxycycline & zinc, dexamethasone),

• Australia currently has almost 4,800 confirmed active cases with 38 people in a serious or critical condition. 32 of these are in Victoria,

• Australian has conducted over 5.7 million tests with 0.4% of those positive,

There are more than 100 vaccine candidates under evaluation, more than 20 in clinical testing, and 6 in phase 3 trials – 3 western companies and 3 Chinese companies. At this stage, all 6 are likely to make it through phase 3 trials, and the three western company’s vaccines are all highly scalable. Assuming phase 3 success, we should have emergency use authorisation before the end of this year with mass production (500m to 1bn doses per company per year) beginning early next year. This is very promising as it pertains to economic re-opening and travel.

Lastly on the vaccine front, 2 other considerations include likely dosage and required vaccine take-up. At this stage, the dosage is likely to be a first vaccine followed by a booster a couple of weeks later. Then a single shot each year after that as part of usual flu vaccine before flu season starts. In terms of required vaccine take-up, the science currently shows that 20-25% take-up would be sufficient to encourage some sort of herd immunity, but obviously the more people that take it the better.

Putting all that aside, investment markets have continued to perform strongly in light of improving news on the virus front and optimism regarding an early vaccine, whilst extraordinary government and central bank stimulus has supported investor sentiment and asset price inflation, particularly equities and corporate bonds. Both governments and central banks have made it abundantly clear that they will keep providing support until there is clear signs of a sustained economic recovery. That support means direct payments to households and businesses, cash rates at zero, and very low borrowing costs for governments and corporates.

Government support will need to be adjusted in 2021 as the current pace of direct handouts cannot keep going. But the governments have plenty of tools in their toolkit including labour market reform, tax reform, re-education / retraining of the workforce, infrastructure, etc, a few which we’re likely to see early next year, whilst central banks have made it very clear that they too are committed to doing whatever takes to get inflation higher and unemployment lower. The game changer will be potential early vaccine. If that eventuates, then new stimulus does not have to be that much larger from here and can instead be more targeted to those industries where recovery may be more structural. If early vaccine does not eventuate, and governments continue on the current path of lockdowns as the only health policy response, then new stimulus will have to remain large and wide for some time.

And on the asset performance front, returns for both calendar year 2020 and since March lows are shown in the table below (in AUD):

US tech, and global tech to a lesser extent, has been the clear winner, hardly surprising in terms of leading the pack, but very surprising in terms of the magnitude. Australian equities caught a strong bid since the March lows but were very much helped by the rising Aussie dollar which saw the pace in growth of non-Aussie dollar assets start to moderate. Gold is not in the table above, but has rallied strongly year to date, as have gold company share prices. Gold is in the enviable position where it has caught a bid from those in the inflation camp as well as those in the deflation camp…odd but real.

Given the commitment by governments and central banks to do whatever takes, and given current optimism regarding an early vaccine, it is fair to say it’s onwards and upwards for risk assets from here. The US election result may cause some consternation, but the investors are clearly focused on virus outcomes from here. 2021 will be interesting for investment markets depending on what changes we see to government and central bank policy.

Rounding out this update on the political front, I did make some comments early in the piece regarding the complete politicisation of the virus including the health policy response and treatments. Outside of that, US-China tensions have escalated yet again which is hardly surprising leading into a US election. In addition, Australia-China tensions are probably at the worst in multi-decades, with the Chinese limiting/hampering meat exports, then barley, then education/tourism (apparently we’ve turned racist against all Chinese so they’ve advised no travel to Australia, not that they can get in), and now wine is under attack on spurious anti-dumping grounds. This could continue to get messy. Hopefully the US and China can find a way to co-exist as highly competitive superpowers, but if they can’t, then there may become a time in the not so distant future where Australia has to pick a side. That will not be pleasant.

On the US election front, we now have Joe Biden and Kamala Harris leading the Democrat charge. Early this year, Trump was the clear favourite. That then swung completely around post virus with the polls clearly in favour of Biden and the Democrats. However, just like 2016, the Democrats have shot themselves in the foot and are doing their best to give their gains back to Trump and the Republicans who have been rather measured and happy to sit back and watch it unfold in their favour. At the current turnaround pace, and assuming the debates are disastrous for Biden (assuming they are held), it might be enough to give Trump a second term. That would be a positive outcome for investment markets thus continuing the current positive momentum.

Closer to home, fair to say Dan Andrews is doing it tough down VIC with calls for his resignation, whilst Queensland goes to the polls soon where we’ll see whether Queenslanders have lost or maintained their faith in Annastacia Palaszczuk’s leadership through the virus. PM Scott Morrison looks untouchable at present having played almost every hand superbly. However, he too is coming under pressure from within his own party and Conservative voters who are not happy about too much government control / overreach and the debt and deficits that are being racked up.

At this stage, staying the course remains the best course of action. Diversification remains key as always. Dollar cost averaging into the market is prudent for those who are more apprehensive and those with shorter investment time horizons. Central banks will continue on the path of financial repression when it comes to cash and bonds. Equities do not look cheap in absolute terms, but this is a relative value market. An early vaccine may see the Value investment style catch a bid, but time will tell whether that bid is at the expense of the Growth investment style.