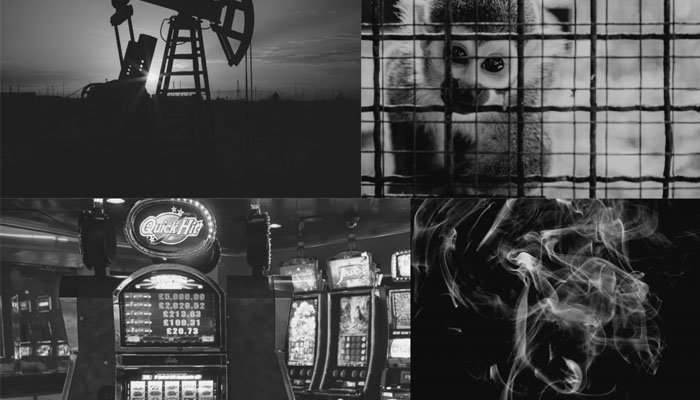 The dirty dozen. Part 1. The harmful industries that sneak into our portfolios.

By Paul Garner - "Everyone deserves their ideal retirement and a future to invest in"June 11, 2020September 1st, 2021No Comments

Our money is being used to support companies and industries, but do we know what is actually in our portfolios? Both superannuation and investment fund managers use our money to buy shares in companies. These companies can be good or bad for society and the environment. While some investment mangers are trying to allocate your money in ways that benefit people and planet, others are falling short.

Here is a brief look at some of the industries that your portfolio might be exposed to. Speak to your financial adviser if you have concerns about the dirty dozen.

In part 1 we look at gambling, tobacco, fossil fuels and animal welfare. In part 2, we will be discussing logging, human rights abuses, alcohol and GMOs. The final instalment, part 3, we look at pornography, nuclear, labour rights and armaments.

Gambling can have serious harmful effects on individuals, families, and society. With the development in gambling technologies, online wagering has become the fastest growing segment, expanding the harm that problem gambling can cause. According to the latest gambling statistics, Australians lost just under $25 billion in 2017-18. Per person, that is more than $1,290 lost to gambling every year, and an almost 5% increase on the figures from 2016-17. Gambling losses represents money that could be spent on mortgages, necessities, children, health and well-being.

In portfolios, there may be companies that have direct involvement in gambling, such as Crown Resorts, Sky City, Star Entertainment Group or Tabcorp. However, there is possible indirect exposure through manufacturing of gambling equipment (Aristocrat) or organisations that are involved in hospitality and hotels. For example, Woolworths is in the process of divesting from its pokies investments by spinning out separate entity Endeavour Group, but is still exposed to gaming rooms until the split takes place. Wesfarmers demerged from Coles Group, then Coles entered a joint venture to offload their direct involvement in hotels and gaming. Shareholders have the power to pressure big companies into divesting from harmful practices.

Dr. Bronwyn King, a specialist radiation oncologist from Melbourne, cared for patients suffering from lung cancer. However, Bronwyn was unaware she was also supporting the global production of cigarettes through the default option of her superannuation fund, until a discussion with her fund in 2010. “I thought it was a very bad fit for me as a cancer doctor. I had watched hundreds of people die from tobacco-related disease,” Bronwyn reflects. Bronwyn approached her super fund and after a lengthy process, her fund decided to go tobacco free in 2012. Bronwyn is the founder of Tobacco Free Portfolios, encouraging the finance industry to engage and act on this issue.

Many Australians still unknowingly invest in tobacco through their superannuation funds, pension schemes, banks and insurers. While it may be obvious that a portfolio supports tobacco if invested in Philip Morris or British American Tobacco, there may be other companies that you are invested in that are not as clear. For example, you could hold Amcor that produces tobacco packaging, or supermarkets such as Coles or Woolworths that sell tobacco products.

Investing in fossil fuel companies, including coal, oil and gas, not only has consequences for society and the environment, but also carries risks involved with stranded assets and the physical impacts of climate change. Food and agriculture are expected to be affected by climate change, with increased droughts, floods and higher temperatures reducing the productivity of harvests, and rising sea levels consuming large rice-producing deltas. Disruption of fossil fuel energy is occurring, and accelerating, due to the falling costs and increased capacity of green technologies. During the 2020s, renewable costs is expected to fall to a point whereby it will cost more to run an existing coal or nuclear plant than build and run new solar or wind. The capacity of wind and solar has increased, and battery costs have fallen dramatically.

Despite several super and investment funds divesting from fossil fuels, you may be exposed depending on each fund’s definitions and materiality thresholds. It is not just mining companies like BHP or Woodside that may sneak into your portfolio, but you may discover indirect exposure to fossil fuels. For instance, you may be exposed to fossil-fuel intensive industries through companies Sydney Airport or Transurban. Or you may be helping to finance the fossil fuel industry by being a shareholder in a large bank. You can discuss these nuances with your adviser.

The cruel treatment of animals can surface in several industries such as animal testing for medical purposes or cosmetics, live animal exports, textiles and the clothing industry or factory farming. The testing of some therapeutic goods (pharmaceuticals or devices) may be necessary for certain medical advances if animal welfare is a priority. Factory farming can mean that animals are confined and subject to appalling conditions as well as mutilations. For example, debeaking or castration, often without pain relief. Animals may be fed hormones and other growth-enhancing substances which puts strain on their bodies and affects their health and well-being.

Poor animal welfare is a risk for investments as well as an ethical dilemma. To avoid exposure, you may need to exclude companies that transport or export live cattle. You could avoid organisations such as Charles River Laboratories and Gilead Sciences that conduct animal testing. L’Oreal is an interesting case. While they have worked hard to eliminate animal testing, even developing human skin models in laboratories, some of their products need to be tested on animals to satisfy Chinese regulations. Factory farming companies such as Inghams Group may be an issue for some, while investing in aquaculture is not without controversies due to intensive farming and fish death events.

It is not all bad. While there are companies that might be avoided, there are plenty of companies that are doing the right thing. By making conscious investment decisions, shareholders can influence positive change.

Do other issues concern you? Is there anything you would like to avoid in your portfolio?